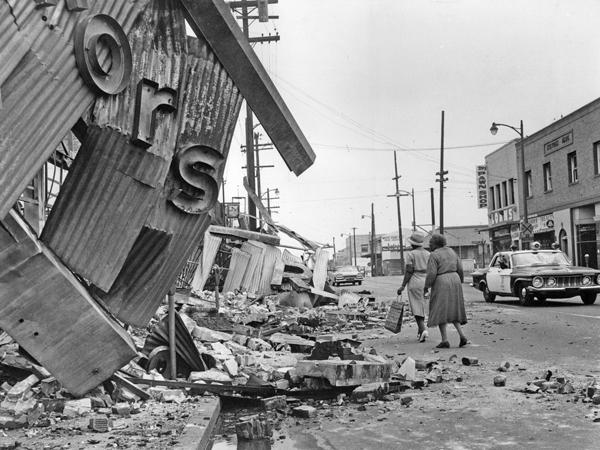 “Therefore you could argue, during that period of time it would have been much better not to have this system of government—you know, not have a democracy. I think, at any time, you can say that it would be much better if we could have sent people—large numbers, perhaps—down to Mississippi and been able to protect that group down there. But I think that it comes back to haunt you at a later time. I think that these matters should be decided over a long range of history, not on a temporary basis or under the stress of a particular crisis.

“In my judgment, Mississippi is going to work itself out, and Alabama is. Now, maybe it’s going to take a decade and maybe a lot of people are going to be killed in the meantime. And that’s unfortunate. But in the long run I think it’s for the health of the country and the stability of the system….”

“I thought a good deal more needed to be done [on voting rights]. I felt that of course this was the area in which we had the greatest authority; and if we were going to do anything on civil rights, we should do it in the field where we had the authority. And number two: I felt strongly that this was where the most good could be accomplished. I suppose that’s coming out of a political background, but I felt that the vote really makes a major difference. From the vote, from participation in elections, flow all other rights, far, far more easily. A great deal could be accomplished internally within a state if the Negroes participated in elections and voted.

“….In some of these communities it could make a huge difference. And that was the key to opening the door to all of what they wanted to accomplish in education, in housing, in jobs, in public accommodations. All rested on having the vote and being able to change the situation internally.”

On Civil Rights in the North

“…I think the ills that people suffer are so hard to escape in a northern community. It’s basically poverty. I suppose you just have to exist to know that there’s a ghetto system, and that the education’s not as good, and that people can’t get jobs as easily if they’re Negro as if they’re white people. All you have to do is walk down the street between Seventieth and Thirtieth and see how man Negroes you see in the city of New York. It’s the same in every community.

“I just thought that things needed to be done for Negroes in education and employment and housing. And particularly for young people. Like the work we did with the juvenile delinquency committee. I think that would have been very helpful. Seeing what has to be done for preschool education for Negroes, for instance, in major cities. The fact is that fifty percent of all your basic intelligence—you IQ—is determined before you reach the age of five. Well, if a Negro child is born into a home that is broken—and the mother doesn’t read or write—it’s pretty tough for the child ever to be developed or prepared to go to first grade, be prepared to go to school…

“The problems of the north are not easily susceptible to passage of legislation for solution. You could pass a law to permit a Negro to eat at a Howard Johnson’s restaurant or stay at the Hilton Hotel. But you can’t pass a law that gives him enough money to permit him to eat at that restaurant or stay at that hotel. I think that’s basically the problem of the Negro in the North, and that’s why I think it’s more difficult to be dealt with….I don’t think that people realized the depth of the problem and the fact that the solution was not easy and required the attention of the community and the state as well as the federal government.”