Posted by jonfrankel on Jul 13, 2015 in Fiction, Novels and Novelists | 1 comment 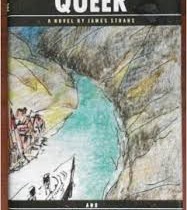 The first thing I noticed about James Stahs’ Queer and Alone is that the narrator protagonist is neither. At least not in the conventional sense. He is certainly queer in the old sense of the word, and he is alone also in the sense that he has no awareness of how others perceive him, but he spends the book mostly speculating on womenâ€™s bodies and underwear, and he is almost always with other people.

Desmond Farrquahr is living in a villa outside of Rome when he receives a dire prophecy, that he will be betrayed by friends and die. A man of mysterious means, he leaves the villa and finds a steamer bound for Hong Kong by way of the Cape of Good Hope. On board and at various ports along the way Des has a series of increasingly bizarre and surreal adventures. All of the events of the novel are bent by the demented perspective of Des. Strahsâ€™ narrator is a queer duck, with a Beckettian sense of language. But this is a low rent production. It is not a Nabokovian jewel box. Desâ€™s solipsism is extreme, and he is language obsessed. The major driving force of the book is sex and it is thoroughly perverse, toying constantly with pornography. Strahs’ from page one evinces a thorough, unsettling misogyny, the only aspect of the narrative that is not ironic. It is part of the dark underpinnings of what is generally a very funny bit of oddball improvisation. Like all journeys this one needs no plot. It goes forth with the wind of psychosexual compulsion in its sails. Strahs’ style and perspective remind me of Robert Walser. He intentionally uses the words Gay and Queer in their old accepted sense and does so with almost every other figure of speech, real and invented that peppers his text, caged by <<double brackets>>. Innocent words and phrases become obscene through a process of inversion.

There are characters: the Caymans, or, as Des calls them, the Caymen, Nannette and Cayman, an older couple, perhaps in their fifties, probably closer to sixty, with whom he drinks. Despite frequent expressions of disgust he and Nanette have a barely concealed dalliance that involves the most frequent act of sex portrayed, the hand job. Despite many references to fur gates and juicy puddings, rear entries, ass obsessions, and nose blowing, it is the good old hand job, with detailed descriptions of the launch and landing of the narratorâ€™s semen, that is portrayed both on board ship and on land most often. There are the placidly innocent blond naÃ¯f Deborah and her ravager Rory, a man intent on sleeping with all of the women on board. Desâ€™s obsession with Deborah and Rory ultimately is his undoing. The shipâ€™s captain says little (and that rendered into absurd pidgin) but is often spoken to by Des until he falls into an unexplained funk. In fact the other passengersâ€™ horror of Des emerges here and there through the Rube Goldberg sentences. It would be wrong to say there is no purpose in all of this but I wouldnâ€™t want to burden the narrative with some serious intent other than the authorâ€™s determination not to allow the reader to settle down into an old fashioned narrative with interesting characters and the conventional satisfactions of incident, instead supplying a steady flow of weird and amusing sexual situations blinded by oblique description. At one point near the end Des, in Hong Kong, at the table of a Communist Party ideologue, has this exchange with him:

â€œHe then zeroed in on my opinions under the guise of an interest in art. As if from nowhere he asked:

â€˜Under what conditions would one need such <<frigid irony and overheated satire>>?â€™

â€˜What irony and what satire?â€™ I started in unfeigned ignorance.

â€˜Oh, you knowâ€™ he drawled, winking. That pickled fish, I thought, and then said:

â€˜Well, itâ€™s really the maintenance of a constant and absolute aesthetic, isnâ€™t it, really, at any expense. Something from which to pivot regardless of terrain or weather conditions or etcetera, isnâ€™t that what youâ€™re after?â€™

This fairly describes the central assertion and dilemma of the book, the use of irony and satire to subvert representational art and the drive to force art into a purpose other than desire. This wayward, dirty, knowing and intelligent novel is a pleasure to read, an anarchic riposte to puritanical political/sexual earnestness and an emetic designed to both purge and go down easily. James Strahs, was a playwright associated with downtown avant-garde theatre in New York in the 70s and 80s, especially the Wooster Group. He died on October 1st, 2011, in Vermont. This book has been out of print, but is being republished by Whiskey Tit.