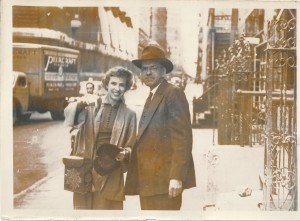 The three novels collected here were published between 1946 and 1952 to no acclaim at all. They sank into oblivion, recognized only by Diana Trilling, who compared the author to Henry James, and Edmund Wilson. Decades later Gore Vidal reviewed them, and suggested Wilson’s enthusiasm was at least in part stimulated by the gender of the author, whom he did not know was in her late sixties. Either way, they were at least recognized by two people whose work would remain available, so that Doris Grumbach, discovering them in 1978, could do the work that would bring them back into print 50 years after their first publication. Isabel Bolton is a pseudonym for Mary Britton Millar, about whom practically nothing is known. She was born 1883 and died in 1975. She lived in the Village, along with many other authors of her vintage. I came across Bolton in Steven Dillon’s Wolf-Women and Phantom Ladies: Female Desire in 1940s US Culture (Albany: State University of New York Press, 2015.). Millar wrote poetry, and a memoir of her childhood, which is supposed to be brilliant. She is quoted as saying that all fiction is autobiography, so I am guessing that the stories she tells in these three novels are close to life, if not memoir.

New York Mosaic is a beautiful book in which the city of New York shimmers. Page after page is filled with the incidental detail of life in the city, of its sounds, its moods and its odors and especially, the fragrance of its time. The similarity to James is the use of a consciousness through which all of the action is filtered, mixing memory and desire. But where James is suggestive and elusive, especially with sex, Bolton is explicit. There are naked people in these books, gay people, lovers, and orgasms, but no condemnation or judgment.

In Do I wake or Do I Sleep practically nothing happens at all. It is set shortly before World War 2. A charming, shallow socialite, Bridget, meets her friends Millicent (through whose eyes the story unfolds) and Percy for lunch. Cocktails follow, then a light dinner, and then a party. To give the bones of the plot is to betray the magic of this novel, for it is in the weaving of Millicent’s past and her observations of the people around her that the warmth and loveliness of the story lies. People get drunk at a long and tedious cocktail party. There is an act of violence.  Millicent flies to the rescue of Percy, and Bridget falls in love for the 25th time. It sounds obnoxious but it is not. It is a glimpse at New York’s smoke filled martini parties, and of the apocalyptic feel of hypermodern architecture, as well as French restaurants, where they dine on Dover sole brought in by ship. The deepest note of unease, the dissonant bass note thrumming to the surface periodically, is Hitler, and the crisis caused by Bridget’s secret, that she has a daughter living in Austria, and that the father is Jewish.

The Christmas Tree is much more astonishing and melodramatic. The filter here is Hilly Danforth, older than Millicent by at least ten years, a grandmother caring for her 5 year old grandson, Henry. It is Christmas Eve in 1945. Henry’s mother Anne is returning to New York from Reno, where she has divorced Hilly’s son Larry and married a war hero, The Captain. Larry is gay, and explicitly so. Because of a series of telegrams, Larry is coming to New York too, and his boyfriend, whom he breaks up with, George, follows him. Larry, George, Anne and the Captain converge on Hilly’s apartment, and the expected narrative explosion occurs. But long before this Hilly has stripped back every layer of her life, and of the wealthy, nasty, duplicitous family she comes from. In this book the apocalyptic feel increases, as Henry plays with a B24 bomber, the one used on Hiroshima and Nagasaki. Bolton explores desire initially through the language of psychoanalysis, a fad at the time, but radiates far beyond it.

The last volume, Many Mansions, is set in 1950, and is narrated through the mind of an 84 year old woman. Again the past is plundered, and again by a woman solitary. Now she is old and she explores her loneliness, the fact that she has never married, and the consequences of a child she bore out of wedlock and who is taken from her by Victorian custom. She has written a novel, and she rereads this novel while preparing to meet a young man she knows to give him 50 dollars. Through the course of the novel her life funnels into an isolation she accepts but is disturbed by. There is a climax, again somewhat melodramatic, but to me, that makes no difference for again it is the texture of memory, of the city, and of the sense both writer and protagonist bring to the crises that have shaped her life.

What makes the books rise above their individual melodramas is the artistry, the presence of an overall design, which is perfectly and quietly done. The books are almost of equal length, 125 pages, and each presents a woman at a different age. By the end it takes on the aspect of a single life, narrated at three different points in time. There is no self-pity in these pages even where there is great loss and pain. If anything, pain is something she is curious about, something that must be solved, and this individual pain is always contextualized by the events of the time, especially of the 30’s and the war. Her emotional vocabulary and her ability to convey feeling as well as a style that allows the story to hover above the plot like mist above a lake is extraordinary. In this sense I think John Williams’ Stoner is the book that comes closest to it both in method and mood, which places it in rare company.

I loved these books, wildly.