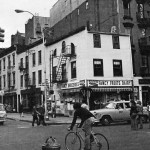 I decided for my mother’s memorial to buy a suit. The suit I possess is a hand-me-down and makes me look fat. It’s also a light color and I wanted something dark that I could wear to interviews (a remote possibility) and actual funerals or weddings. It would have pleased my mother. Between us there was the residue of childhood battles over suits, which I regarded as something worse than an iron maiden. And I do feel like I’m being hanged whenever I wear a tie. But I like the way I look in a good dark suit now, if the cut is right. Buzz Callaway always wears a suit.

Missions like this are best conducted in company. On my own there is no telling what I’ll return with. I’m like the father of my childhood who is sent to the supermarket by circumstances and comes home with pickled lamb tongues, mustard and Wonderbread, plus 42 cans of frozen orange juice because it was on sale. And so I enlisted my daughter, Q. Q is 23 and into something I’ve never known a thing about, fashion.

It was Friday, late morning, when we set out for a discount department store with steeply marked down designer clothes she knew about on 7th Avenue. The sky was overcast with dirty, rainless clouds. Most of our time together in the past couple of years has been difficult. I knew this would be an opportunity to spend time with her without talking about what she is going to do with her life, or money, or mental health. I was in her power box, fashion. She was going to help me. Therapeutic for both of us.

Since my mother died in February I have spent more time in Manhattan than I have in 15 years. Manhattan is my muse. As a small child I was traumatized by its noise, fire engines particularly, and was happy (at the age of 4) when we moved to the Mt. Kisco. But by the time I was a teenager (and living in Larchmont) everything was reversed and I loved the city. To this day the smell of NYC in the 1960s pervades my heart’s mind. I still see and smell that city like a ghost of grime clinging to the shiny fake surfaces and shiny fake people who largely inhabit it now. It is the smell of dog shit and leaded gasoline, of roasting coffee and diesel exhaust. Manhattan is the place where I feel most at home on earth.

My mother and father arrived in NY in 1945. In 1964 they moved us to Westchester. My mother stayed there until 1985. For nearly ten years I lived on First Avenue. Manhattan has been the family home for most of the past 66 years. I still have close friends and family there, but with the death of my mother I have lost the last piece of the island that was mine.

Q is patient with me, insists that I try on more suits than I want to. “This one makes me look fat,” I say.

“I really like the way you look in that one.”

“But I like the white thread running through this.”

“Yeah, that’s good, but the other one is better.”

“Sure, but see how baggy it is? I won’t have time for extensive alterations.”

We got one that I loved, Italian wool, black with a white thread stripe. A $500 suit for $200. With the 15% off we got the shirt for virtually nothing.

The next part of the mission was to find a tailor and pick my mother’s ashes up from the funeral home.

As we walked I wondered if the suit was too baggy. “Let’s look for guys in suits,” I said. “To see if it’s too baggy.” We didn’t see anyone. Below midtown and above Wall Street it seems no one in New York wears a suit. This was both reassuring and annoying. I am used to getting what I want right away, especially in the city, and now there wasn’t a guy in a suit to be seen over the course of a mile of walking through the West Village.

In the eighties the West Village was extremely expensive and very upper class. It was the old Bohemia. Now it seems like one of the few neighborhoods that has retained its character. It may not be economically different from the rest of Manhattan but it is still Bohemian in its way (no suits). As we walked it also made me sad. All I could think about was all the men who lived there who were dead. It is like passing St. Vincent’s now, knowing it has been closed. I suppose the world’s largest Duane Reade will go into the building that once served as a hospital and community center to the neighborhood, and which was both a great place to have a baby and at the front lines of the AIDS epidemic, as it came to be known. This history colours every corner, and our mission is death related, so naturally I felt melancholy as we headed across Bleecker St.

The funeral home is on Bleecker and Sixth. It used to be on Spring Street. I knew about it because when a relative unexpectedly jumped out of his 9th floor window I had to find a cheap cremation. I found this place, in the Yellow Pages. Despite the fact that they had moved and changed their name, I found them again. They were still cheap and unpretentious but the digs were better. On Spring Street it was a tiny place located below street level. The undertaker, a friendly man, was pallid, and in a black suit. The drapes were heavy, the walls red, the space tiny and darkened by mahogany furniture. The new space has tall ceilings and is painted yellow with white trim. Light pours in through the windows. They too are powder pale people, dressed all in black.

“I’m here to pick up my mother’s ashes,” I say. The woman takes our name and we sit and wait while they find them. I tell Q about what the old place was like. Her eyes are welling up with tears.

Q lived with my mother for over a year while she went to school. I thought it was a perfect match. My mother needed watching and my daughter needed watching and a place to stay. But they drove each other nuts. In her late eighties she couldn’t tolerate the anxiety created by the nocturnal hours Q kept. And Q couldn’t stand the dust, heat, and junk my mother lived in, nor the sarcastic comments. Eventually Q moved out. My mother had peace at home then. But there was no one there to help her when she fell, cracked a rib and split open her scalp. No one there to help her get to pulmonary physical therapy. And Q had to leave the city because she couldn’t afford to live there.

Despite this history they were very close and Q was, and is, deeply saddened by her grandmother’s death. They hand me the ashes with the instruction that I not lose the Certificate of Cremation.

Out on the street I look at the box and start laughing.

On MacDougal, just south of 8th Street, is a little thrift shop. We went in there to buy a tie. There were a bunch of ties crowded at the end of a rack. This took nearly as long as the suit, as we had to reject anything with stripes, chevrons or bars. There was music playing, a lot of old seventies songs. David Bowie singing China Girl, a song I didn’t know he sang (I know he co-wrote and produced it, on Iggy’s The Idiot, but this is from Let’s Dance, an execrable 80’s album). They were burning incense that smelled like opium. It reminded me too much of being a teenager, the late seventies music and the hippy punk gay vibe of the store, used clothes and incense. Even the address. She selected a pink tie with tiny black boxes. I got a maroon tie with tiny black boxes just in case my wife said no to the pink.

There is a dry cleaner that does alterations across 8th Street. I went into the 3×3 dressing cubicle, put on the pants, and the Chinese man pinned the cuff. We decided that the waist was fine.

My mother’s is less than a block away. We dropped the stuff off and had lunch at Japonica, on University. I love this restaurant. I got Chirashi and green tea and she got a Kaiso Salada. We watched people on the street. It’s a great corner for people watching. And there are a lot of people on University these days. My mother, in the early fifties, lived near there. Q and I didn’t talk much. I know if I were with my mother she would have been talking about all of the little dogs. She knew every dog in the neighborhood.

Afterwards I thanked her and we hugged. She went off to meet someone and I returned home to help pack up crap and prepare for the descent of family and friends.