My son Andalucia 5 is in the city for the weekend to see the Mets play the last game of a glorious season, leaving me with Andalucia 4, who is 15. A 15 year old can be a tough customer, more inclined to grunting than conversation. Andalucia 4 and I however still share a few enthusiasms. One is good food. The other is gangster movies. When he was 12 I took him to see The Godfather at Cornell, on da big screen. That’s how old I was when I read the book and saw the film. It was a wonderful thing seeing it together, and we’ve been meaning to see part 2 ever since. So, with the house to ourselves on a Saturday night I proposed 2 things: I buy a nice piece of fish, one we wouldn’t normally get because of the cost, and that we watch The Godfather Part 2. This being agreeable to the occasionally disagreeable, somewhat prickly Andalucia 4, I set about making a meal I usually make for myself, a Thai inspired dish. But then, alas, Billy, my good friend Billy, had the evening, not the night, free. So Billy, who likes to eat also, joined us. Normally I make this with tuna steak, but the tuna steak was from Sri Lanka, and the swordfish was from the USA, so I went swordfish. I think I’ve posted a version of this before, but in that version everything is cooked in an iron frying pan. In this one I’ve grilled most of it. It is a Thai inspired dish as I said, but it’s not an actual thing I’ve ever seen. I grilled tomatoes, jalapenos, red onion and garlic. I grilled the swordfish. I assembled them with a fish sauce and lime juice dressing, and sprinkled fresh herbs on top of it all. It is spicy, salty, sour, sweet. The fish easily stands up to this onslaught of flavor. I served it with white rice and a salad, and allowed it to overmatch a 10 dollar bottle of red wine. At meal’s end our tongues were buzzing with heat and conversation. Then Billy left, and we watched one of the greatest movies ever made. This time anyway I liked it better than the first. Likely that will change as all things do.

3 swordfish steaks, about 3/4s lb each

An hour or so before you are going to cook the fish prepare it for grilling: salt both sides, and the evenly apply the cracked pepper and coriander seed to each side, patting the spices into the fish. Set aside.

Get a grill going. It will need to be hot. Mine was 500+ degrees, with a good bed of coals for charring

Rub a little oil on the tomatoes and chilies. Peel the onion and cut 3/4s of it into wedges about a half inch thick. Toss these wedges in some oil to coat. Do the same with the unpeeled garlic cloves. Take the remainder of the onion and arrange it on a platter you will use to serve the fish. Sprinkle some chopped mint and cilantro on top of it.

When then grill is ready char the onions, jalapeno, tomatoes and garlic. You don’t want them black but they should be cooked. The tomatoes should just be softening and taking on color. You want the juice. Chop the jalapeno (take the skin off if you like) and the tomatoes, keeping as much of the juice as you can. Combine these in a bowl with the onion. Peel and chop the garlic (it will be like a paste), mix it in, and add half the remaining dressing. Toss to combine. It should be chunky.

Brush the swordfish with oil and grill 10 minutes an inch (flipping it halfway through) over hot coals. It should be just done, charred on the outside, with a nice pepper crust. When it’s done, put it on the platter, on top of the raw onion and herbs, then spoon the remaining dressing onto the fish. Put the tomato-onion-pepper mixture on top, and garnish with the rest of the green herbs. Serve with White rice. We had a tossed salad of ettuce, arugula, escarole, carrot and sweet pepper. I used safflower and a little sesame oil and rice vinegar. A Riesling would be outstanding, as would Gewürztraminer. I had it with a cheap shiraz. Beer or Gatorade? Why not. Andalucia 4 had root beer. 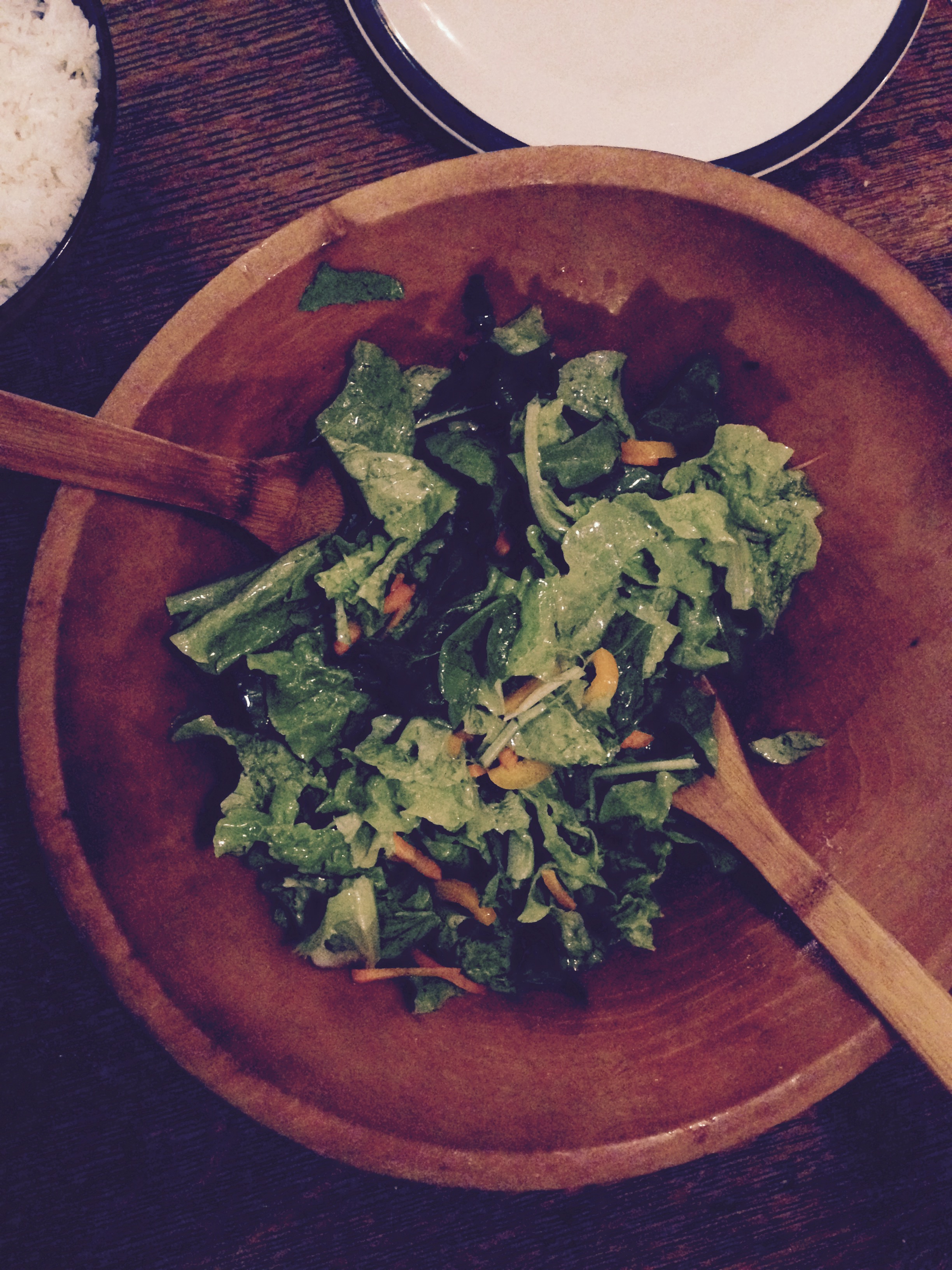