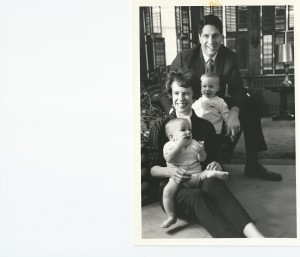 My parents, my brother, and me (on my father’s lap)

NOTE: Since writing this jocular piece, which intentionally makes light of the whole identity business, I have learned a few things. One, I am 100% European, 80% NORTHERN European! HA. So, I want a raise, and I’m voting Republican from now on. But joking aside, I also, as a result of some other information, have some strong possibilities of the identity of my birth parents. And in this age of Googling, if you are one of the Jackson/Price family looking to find out who I am, please read the post below in the spirit it was written in. I do not believe the circumsatnces of my adoption, for the birth family, were comic in the slightest. My birth mother was a 22 year old woman, pregnant in 1959. And my parents were a couple who desperately wanted children, could not, and were prevented from adopting by religious prejudice and the fact that they were considered to be too old. Well, read on!

I’m adopted. When I was a little kid I sensed that this was something I didn’t want other people to know. I’ll never forget my brother telling everyone on the school bus to kindergarten that we were adopted and feeling horrified. There was also this kid in 3rd grade who promised not to tell everyone, and said he would tell me a secret about himself, that he had a metal plate in his head. Now we were even! I was born in 1960, so everything was different then. There was no way for adoptees to know their birth parents. Some people back then wouldn’t tell their kids they were adopted, and as with so much else there was for some a hovering sense of shame. As Blake says, a mystery creates evil and neurosis. There was no mystery for me and no actual shame because my parents were open and honest. They were totally fucked up in other ways but I’m grateful adoption wasn’t one of them. As a child my parents told me two things: 1) I am Jewish and 2) I am adopted.

I have never really given a shit who my birth parents were, and I have never had much curiosity about them. Birth parents are a total abstraction. My real parents were horrifyingly, concretely real! They loved me, bathed me, fed me, slapped me, gave me an education, took me skiing, provided a home and an extended family and attempted (or my mother did) to nurture those things I loved and cared about and gave me a sense that I could do things. I mean, what the fuck else is a parent to do? I won’t recite the litany of fucked up shit that happened because in the end, it was less significant; or, perhaps, significant in the way that fucked up shit made me who I am.

Occasionally over the years I’ve had intense arguments with people (as has my brother), sometimes other adoptees, but usually not, who were absolutely flabbergasted that I had no curiosity. They thought I was repressed or in denial or lying. Since they have no idea what it’s like to be me I would grow increasingly frustrated. And the fact is I wouldn’t actually get angry, it was usually the person I was arguing with who’s face would turn red and who would start screaming, because I didn’t fit their idea of the traumatized adoptee obsessed with finding their birth parents, nursing a deep hole of loss. I have a lot of deep loss holes but that ain’t one of them. And the fact that I have a question mark where most people have an exclamation point has, I think, shaped me in good ways. For one thing, while my identity is Jewish, I’m aware that I would never be admitted to the state of Israel by the Orthodox, because my birth parents, and my adopted mother, aren’t Jewish, even though I paid my dues! I went to Hebrew school for 7 years. I got called Kike and was chased down the hall by jerks throwing pennies saying, Cheap Jew! Hitler would have killed me for my politics and my ethnicity. Well, big deal. To those obsessed with ‘blood’,  I have no identity. In reality, I really see ‘birth’ as an illusion, you are as you are raised. If I found out tomorrow I am Saami I wouldn’t suddenly feel like a reindeer whisperer! I would still get cold in winter. And my Jewishness is a weird amalgam of the Jewish community I was raised in (Ashkenazi immigrants from Central Europe) and my father’s German Jewish family from Louisville (19th century immigrants who came to farm), and my mother’s Minnesota family of Danish and English immigrants from the 17th, 18th and early 19th centuries. What I really am is a secular, atheist, Jewish New Yorker, a venerable identity and one I’m happy with: cosmopolitan, urban, intellectual, progressive, opposed to ethno-nationalism, religious intolerance and any kind of patriotic nationalistic crap.

But of course there are the biological circumstances of one’s existence. Starting as a teenager I was curious about my biological background, ie DISEASES. I was haunted by the paranoid idea that I might have some weird genetic degenerative disease that my parents never told me about. So I asked my mother about this when I was 18 and she said she knew nothing, but then went on to tell me that I had been privately adopted because, at the time, no Jewish adoption agency would adopt to a mixed family (my mother never converted, despite being a more observant Jew than my father), nor would a Christian agency adopt to a mixed marriage, and the secular agencies would NOT adopt to older parents (mine were in their late thirties, ha ha). The world of 1959.

My father knew Cy Farber, who was a Dean at the San Francisco Medical School. He had a couple of unmarried students who were pregnant. That was me. I learned last year that it was actually my father who flew, alone, out to San Francisco to pick me up and bring me back to the city, six days old. He also said that on the flight home there was a storm so severe he was convinced we were going to die. I am petrified of flying and always have been.

When my mother died I became more curious about my birth parents. And this is weird, I think of my birth mother but not my birth father! Hmmm….Well, I kept meaning to ask my mother and then my father for more information, but the fact is, I could never remember to, and now my mother’s dead. The last time I visited with my father I did ask him, and he gave me the information I wrote above.

In my family we joke about what my ‘real’ ethnicity might be. There are all kinds of theories in the family, and my children seem to care more than I do, but I am curious. Am I Russian, Italian, English? Lately I’ve been having minor health shit typical for someone my age (56). But it always comes up: no family health history. Well, I really want to know now if my birth parents dropped dead of stroke or cancer or succumbed to diabetes or shot themselves on a rainy December night at age 30. I don’t know why but I’d like to know. So I ordered two genetic tests, from 23 and Me and from Ancestry. I will do Tree of Life next. I don’t know if I’ll try to find relatives. I guess I will. My ambivalence is strong. Not hostility, just like, who cares, big deal, what difference would it make. I have a big family I adore. But it’s time to unlock the box while there is still time.

America’s obsession with race, ethnicity, tradition, family background has always mystified me. Why do you care what percent you are? You are 100% you. The admixture is an expressive unity. I understand that if you are a person of color your attitude to this fact accounts for nil. The cop will shoot you. The bank will deny you. The store clerk will follow you. And it’s not like the Nazis were going to carve out an exception to the gas chamber based on my self-report. These are important aspects of identity. Of history. But for me, a white guy, it also doesn’t matter if I should turn out to be 25% Native American and 25% Sub-Saharan African because everyone will see a middle aged, grey haired, pot smoking white guy who used to be a Marxist and lives in an ideological funk. In the end, I’m an Existentialist. Life is absurd. Make the most of it. Love others. Allow others to love you. Then you’re dead.